Dominating the once called Agalem Valley, gently caressed by the Tajo, is the cigarral dedicated to the Custodian Ángel, guardian of Toledo, city to which he presides and defends from the top of his watchtower at the very door of Bisagra.

The privileged situation of this Toledo enclave captivated, from the first centuries of our era, illustrious characters such as Lope de Vega, Tirso de Molina, Marques de Villena and Cardinal Sandoval and Rojas among others.

Its exclusive panoramic view of the Imperial city, its immediacy to the riverbank, the mildness of its summer temperatures, its colorful and lush vegetation,

They made it the perfect place for great celebrations, as well as a meeting place for poets, historians and scholars, who, under the patronage of their patrons, held gatherings and meetings for the cultivation of arts and sciences.

We are therefore facing the oldest Cigarral in Toledo, a unique and exceptional site, surrounded by a magical atmosphere, which has made it worthy of being the scene of a beautiful Toledo legend: «Gold Fishing».

Without extending further, so as not to rob visitors of the pleasure of discovering it for themselves, we welcome you to the Cigarral del Ángel.

Cigarral del Ángel is the oldest of the existing Toledo´s cigarrales. Its origins date back to Arab domination when, in the XIth century, on the remains of a Roman arena, the summer palace of Governor Abd Allah ibn Abd al-Aziz was built, and it was the place where he married the Infanta Mrs. Teresa de León, daughter of Bermudo II and sister of Alfonso V.

Legend has it that during the splendid banquet, gold plates and cups were thrown into the river so that skilled fishermen had a memory of the magnificence of the event.

Subsequently, it belonged to the Marquis de Villena until in the XVIth century it became the property of the Cardinal of Toledo Mr. Bernardo de Sandoval y Rojas, who, on March 4, 1611, donated part of the estate to the Capuchin Religious Order San Francisco, making it the seat of one of its most famous convents. From that moment on, the Capuchins are responsible for the protection and conservation of the convent. Its foundation was intended, among others, to be a center where to instruct future monks and overseas evangelizers.

The plans of the chapel are attributed to Juan Bautista Monegro, considered one of the leading figures of the Baroque-classical architecture of the Castilian school, finishing the works in 1633. It consists of a single nave with two lateral chapels at the height of the presbytery.

The main altar is chaired by a spectacular canvas seven meters high and four meters wide by Vicente Carducho, painter of the court of Philip III.

In the last 200 years the Cigarral del Ángel ceases to be a convent center to become an exclusive private summer residence, being one of its last owners the writer, poet and composer Fina de Calderón, who made the Cigarral a meeting place for poets and cultural activities of international relevance.

Currently, the 17th-century chapel is perfectly preserved and restored, as well as part of the Convent, several courtyards, terraces and gardens, forming an unmatched set that makes it a cigar for the celebration of weddings and events in Toledo. 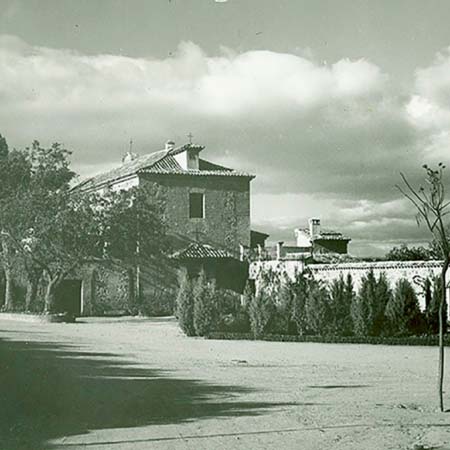 A CIGARRAL OF LEGEND: «THE GOLDEN FISHING»

It was the year 1007 of our era and had as its reason the celebration of a wedding in Toledo. Right here, in this same landscape, then known as Valle de Agalem, with the same magical setting of the city of Toledo in the background, one spring afternoon, was celebrated according to the legend, the bridal bond of Abd Allah ibn Abd al-Aziz, the Moorish king of Toledo with Teresa, a Christian princess, sister of the leonese King Alfonso V.

A wedding feast of such annoying was not remembered in the city of Toledo. It was all a show of exuberant beauty and splendor. The vegetable canopy of the banks of the Tajo looked with its best flavors of aromas and colors, and the banquet, in front of the dazzled guests of the Leonine entourage that accompanied Teresa and those of the Toledo court, offered the most varied and rich repertoire of delicacies, each served in different dinnerware, the first silverware, and all the following of bright shine. To everyone’s amazement, as they were being removed from the tables, the servers threw them into the waters of the Tajo as a despicable thing. After the banquet, Abdallah, accompanied by his wife, addressed everyone present to announce that they were going to witness a wonderful show with which

also, as a sign of his love, he wanted to entertain his beloved. At that precise moment, several boats, luxuriously packed, bordered with pennants and garlands and directed by skilled rowers, furrowed the waters, and, along with the music, they took from the bottom of the river an immense treasure contained in a wide network. In it, with ingenious foresight warmed by the enraged Saracen king, all the pieces of the rich dinnerware that had been thrown into the waters by the bridal banquet servers as low-value merchandise had been collected.

It was The Golden Fishing. It was the same king who, as a wedding gift, took in his hands the most luxurious and most valuable pieces to be distributed among all his guests, who were fascinated by such unusual wonder they had broken into frantic applause, exclamations of jubilation and congratulations to the main couple of the link. The Cigarral del Ángel. A wedding estate in Toledo … with a lot of history!

One of the chroniclers of the episode ends the narration like this:

«The mantle of the night began to cover the broad bottom of the sky, and the mists rose from the river, wrapping everything in its clouds.» 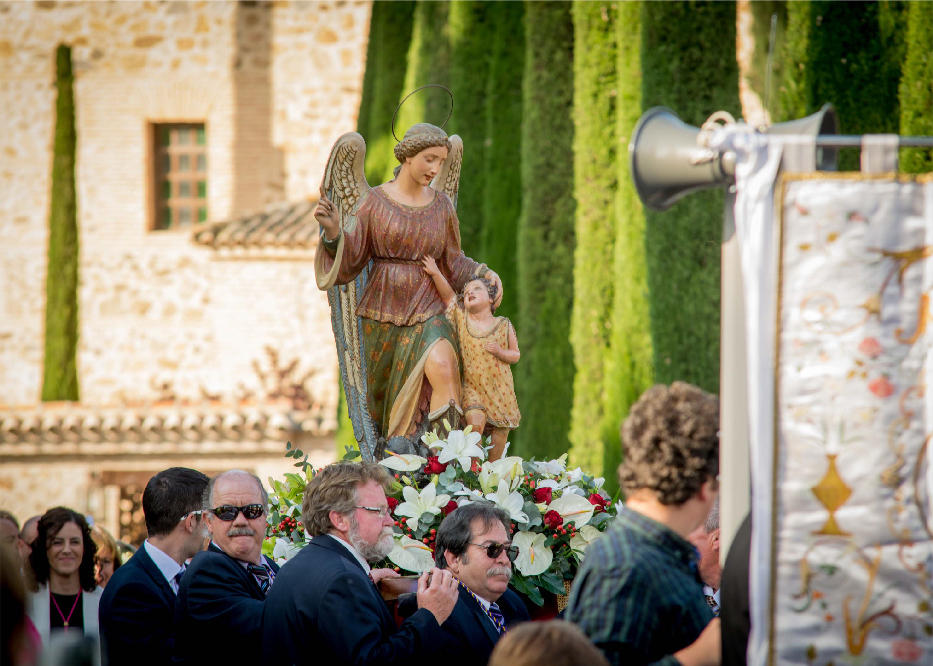 The pilgrimages in Toledo are a tradition that is transmitted through generations of brothers and sisters, which, in the case of Cigarral del Ángel, allows this magnificent place to be open to the public for the enjoyment of Toledo´s people and visitors.

The celebrations begin on Saturday afternoon with a mass in honor of the deceased brothers, and the tasting of the water of the Holy Spring. Sunday morning is the time for the traditional mass, after which the bread threads of the Saint that the attendees will receive along with lemonade are blessed. Also, visitors have fun with traditional Toledo´s games like quinolas with ceramic figures

It is at the end of the afternoon when the brothers take out the image of the Ángel in procession, beginning and ending in the Chapel and touring all the facilities of the Cigarral, through groves and floral walks, patios of Arab origin and fountains … One of the most emotive takes place at the end of the act, in which the people dance to the Ángel to the sound of the national anthem while the faithful throw rose petals.

We present you our exclusive space in the River Zone

The sensation of entering a especial and Majestic place will remain in everyone´s memory: an elegante walk of stylized cypress trees.

Chapel Square is the central place of the complex. Of great elegance, the square is the link between all the elementes of the Cigarral. Located between the Pine Terrace, the Chapel and the Patio of the poets, the two tree-lined driveways lead to this large space adorned by a succession of Stone and brick arches covered in vines and roses.

The Chapel of the Cigarral del Ángel Custodio is without a doubt the noblest part of the enclosure of the original Capuchin convent. It was erected as the provisional seat of the monasticism of Toledo, and its inauguration dates from the year 1633.

The construction was commissioned to the architect Juan Bautista Monegro (1545 -1621), one of the best in the classicist baroque of the Castilian school (and autor, by order of Felipe III, of a total of eleven large statues for the work of the Escorial Monastery, as well as autor of the Chapel of Our Lady of the Tabernacle for the Cathedra lof Toledo).

PATIO OF THE POETS

The Cigarral del Ángel has been, since the 17th century, a meeting place for the most famous poets and artists of the Golden Age, under the patronaje of Cardinal Sandoval y Rojas.

A banquet in this space will always be remembered for its exclusivity. It has a 380 m2 vaulted corridor with arcaded columns that surrounds an elegant garden, and  an attached terrace of 180 m2 with spectacular views of the Tajo River and the historic city of Toledo. Provided with an original cistern and cave from the 17th century, it is adorned with three ornamental stone fountains between flower beds with a careful floral decoration.

Surrounded by ancient trees on one side, and on the Banks of the Tajo on the other, the River Terrace has one of the most spectacular views of Toledo. An unbeatable panoramic in a historical place. It is ideal for any type of outdoor celebration. You will surprise your guests with this unique enclave, full of charm and always caressed by the sound of the river.

The Panoramic Lounge is a large covered space at the foot of the Tajo River with magnificent views of the historic city of Toledo through its large windows.

We present you our exclusive space the Palacete

An impressive promenade of mulberry trees so dense that it hardly lets in the rays of the sun. The mulberry is a tree with a historical presence in Toledo, as the city was one of the largest silk producers in al lof Castilla, and there are still remains of these plantations in áreas closet o the cigarral.

A large garden shaded by huge almost century-old pine trees. Agalén was the name of the valley that was located in this área of the city near the river and in which, according to chronicles, the visigothic monastery where parto f his life was spent by Saint Ildefonso, patron saint of Toledo.

PATIO OF THE ORANGE TREES

A beautiful patio called Orange Tree Garden due to the abundance of these trees. It is not common to find orange trees in the center of Spain, given their low Frost resisntance. Only in places with exquisite gardening care is it possible to fin dan Orange patio in our climate.

The interior os the Palacete: it is an authentic Toledo house built in the mid-20th century and completely renovated. It mixes with exquisite taste the classic style with the modern one and from it you can contemplate spectacular views of the imperial city. Inside the room, guests will enjoya ll the conforts, with a capacity for 200 people arranged at tables of 10 people. It is a diaphanous and very bright romm.